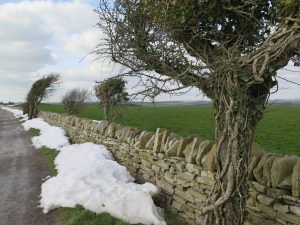 Dry stone is a building method by which structures are constructed from stones without any mortar to bind them together. Dry stone structures are stable because of their unique construction method, which is characterized by the presence of a load-bearing façade of carefully selected interlocking stones. Dry stone technology is best known in the context of wall construction, but dry stone artwork, buildings, bridges, and other structures also exist.

Walls were originally built using stone from local quarries. Many date back to the Inclosure (Enclosure) Acts of the 1700-1800s, though some define much older field and parish boundaries.

Dry Stone Walls are mostly associated with the more rugged Northern counties but there are pockets in Dorset, notably in the Isle of Purbeck and along a narrow coastal strip from Portland to Abbotsbury in the West where dry stone walls have been used as field boundaries.

The wall walks the fell – 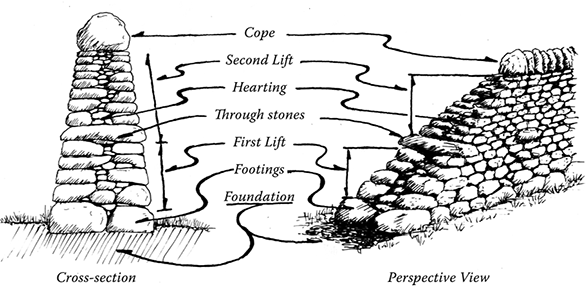 Grey millipede on slow
Stone hooves;
Its slack back hollowed
At gulleys and grooves,
Or shouldering over
Old boulders
Too big to be rolled away.
Fallen fragments
Of the high crags
Crawl in the walk of the wall.

A dry-stone wall is a wall and a wall,

Leaning together
(Cumberland-and-Westmorland
Champion wrestlers),
Greening and weathering,
Flank by flank,
With filling of rubble
Between the two –
A double-rank
Stone dyke:
Flags and through-
stones jutting out sideways,
Like the steps of a stile.

A wall walks slowly,
At each give of the ground,
Each creak of the rock’s ribs,
It puts its foot gingerly,
Arches its hog-holes,
Lets cobble and knee-joint
Settle and grip.
As the slipping fellside
Erodes and drifts,
The wall shifts with it,
Is always on the move.

An international perspective of dry stone walling from UNESCO. Many variations in walling techniques, but the fundamental principles are universal